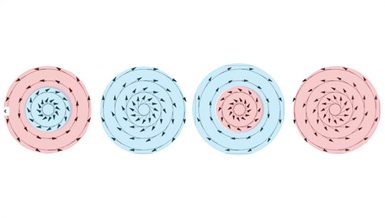 Defects in semiconductors can exhibit multiple charge states, which can be used for charge storage applications. Here we consider such charge storage in a series of oxygen deficient phases of TiO2, known as Magnéli phases. These Magnéli phases (TinO2n−1) present well-defined crystalline structures, i.e., their deviation from stoichiometry is accommodated by changes in space group as opposed to point defects. We show that these phases exhibit intermediate bands with an electronic quadruple donor transitions akin to interstitial Ti defect levels in rutile TiO2. Thus, the Magnéli phases behave as if they contained a very large pseudo–defect density: ½ per formula unit TinO2n−1. Depending on the Fermi Energy the whole material will become charged. These crystals are natural charge storage materials with a storage capacity that rivals the best known supercapacitors.

As our energy requirements grow, and alternative energy sources become an integral part of most countries’ energy matrices, energy carriers, in particular charge storage systems play an ever increasing role. Li-ion batteries have played the major role in energy storage up to now, but new systems termed supercapacitors have emerged and are becoming more popular. In this case, a number of materials – mainly metal oxide thin films – provide charge storage due to the presence of defects inside its porous structure. We present an alternative strategy to design charge storage materials, based on Magneli phases of titanium oxide TinO2n−1. These can be considered as oxygen-deficient phases of TiO2, but the off-stoichiometry is accommodated by changes in the crystal structure, manifested as shear planes, as opposed to point defects, such as oxygen vacancies or Ti interstitials. 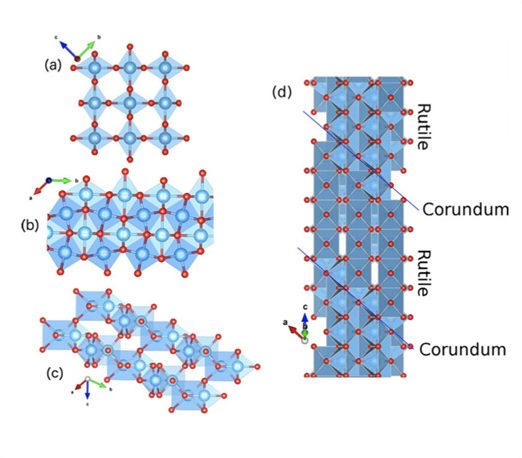 (a) Rutile TiO2, (b,c) corundum Ti2O3 view along and parallel to the c axis respectively, and (d) Magnéli phase Ti4O7 structures. Ti atoms are blue spheres enclosed by blue octahedra while oxygen atoms are red spheres on the edges of the octahedra. In (d) the blue lines enclosure the four-units rutile-like chains along the c direction, bounded by corundum-like planes restricted to the (001) planes. 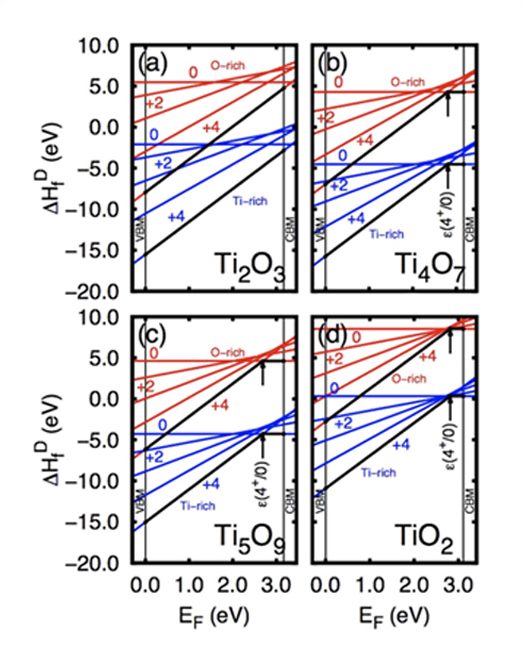 Formation enthalpies for (a) Ti2O3, (b) Ti4O7, (c) Ti5O9, (d) and Tii point defect in rutile TiO2. The Tii formation energies shown on (d) are from ref. 16. The thick black lines emphasize the lowest energy charge state for each occupation for the entire band gap span, and the transitions from +4 charge state to the neutral charge state in Ti4O7, Ti5O9, and TiO2 are also featured as ε(4+/0).

The isosurfaces are depicted for all charge states, from the neutral case to +4 from left to right. We plot the same isosurface (10−2 e · Bohr−3). The +4 charge state presents no intermediate band, the structure is presented only for the sake of completion.

Another important work has been developed with topological insulators which was published  Nature Communications. Topological insulators are a new class of matter characterized by the unique electronic properties of an insulating bulk and metallic boundaries arising from non-trivial bulk band topology. While the surfaces of topological insulators have been well studied, the interface between topological insulators and semiconductors may not only be more technologically relevant, but the interaction with non-topological states may fundamentally alter the physics. Here, we present a general model to show that this type of interaction can lead to vertical twinning of the Dirac cone, whereby the hybridized non-spin-degenerate interfacial states cross twice as they span the bulk bandgap. This hybridization leads to spin–momentum locking of non-topological states with either helical (clockwise or anticlockwise) or even anti-helical (negative winding number) spin orientation depending on the parametization of the interaction. Model results are corroborated by first-principles calculations of the technologically relevant Bi2Se3 film van der Waals bound to a Se-treated GaAs substrate.

Topological insulators (TIs) are somewhat unique in the history of condensed matter physics, as both the nature of these materials and many of their associated exotic properties were predicted on purely theoretical grounds before experimental evidence of their existence was found. The topology of an insulator is associated with the continuous deformation of its Hamiltonian; if it can be continuously deformed to yield the band structure of another insulating system, while maintaining a bandgap throughout the deformation, then they belong to the same topological group and have the same associated Z2 topological invariant. The relatively small bandgap and large spin–orbit interaction in TIs lead to the non-trivial topology and a Z2 invariant, which is distinct from normal insulators (NIs) such as GaAs, Si or even vacuum. Although the bulk properties of TIs are similar to ordinary insulators, the interface between two materials with different topological invariants leads to the emergence of a topologically protected metallic state, which is localized to the interface and has a linear Dirac-cone-like dispersion relation, as described in the Kane–Mele model. 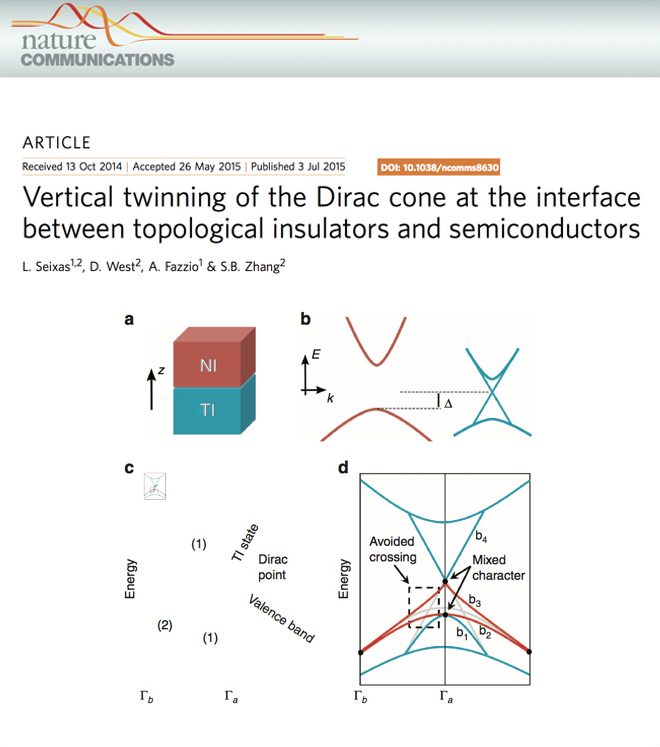 a) Schematic representation of the interface between a topological insulator (TI) and a normal insulator (NI), z is normal to the interface. (b) The band structures of the semiconductor (shown in red) and topological insulator (shown in blue) are depicted for the case of type-II alignment, whereby the VBM of the semiconductor lies within the bulk gap of the topological insulator. The Δ parameter in the Hamiltonian model is the VBM energy relative to the Dirac point. (c) Band structure at the interface in the absence of mutual interaction between the TI and NI. The topological interface state is shown in blue with linear dispersion and the semiconductor-derived bands are shown in red with parabolic dispersion. The degeneracy of the bands are labelled, either (1) non-degenerate or (2) doubly degenerate, and the black dots indicate points that are required to be doubly degenerate due to the preservation of TRS. The dashed box indicates the region in which the NI state and the TI state cross. (d) The effect to c when interaction is turned on. The effect of the interaction is highlighted in the dashed box, in which the interaction leads to an anticrossing between the previously doubly degenerate NI state and the singly degenerate TI state, which requires the interconversion of the character of semiconducting bands and TI bands. As a result, neither of the double degeneracies at Γa can cleanly be labelled as the Dirac point, as both consist of the crossings of state that change from TI to semiconductor character. 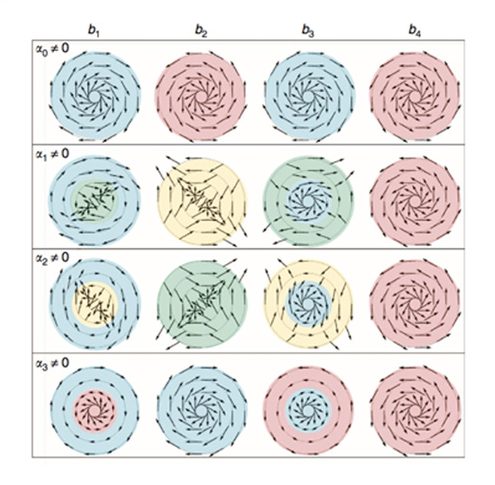 Each figure shows the spin orientation for a particular band for various concentric circles in the kx–ky plane, with the centre being the Γ-point. They are arranged in columns of differing band number, labelled (b1–4) in increasing energy. Each row corresponds to considering a different type of interaction for Vint. In each case, we assume that Vint is parameterized by a single parameter and that all of the other parameters vanish. The choice for non-vanishing parameter, αi≠0, is indicated for each row. The blue- and red-shaded regions indicate left- and right-handed spin texture, respectively. The yellow and green regions indicated left- and right-handed anti-helical spin texture, where the spin has a negative winding number. 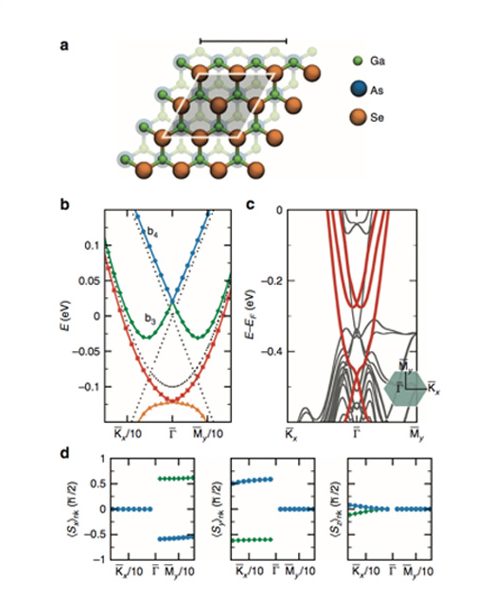 (a) Top view of a ball-and-stick model for GaAs(111) surface with 0.75 ML of Se treatment. The unit cell is shaded in grey; scale bar, 5 Å. The stacking sites of the first atomic layer of Bi2Se3 are labelled by H3, T4 and T1. (b) Chemical stability map for the GaAs(111) surface. The shaded regions indicate which Se surface coverage of the GaAs(111) surface is the most stable as a function of the chemical potentials of As and Se, μAs and μSe. (c) Side view of a ball-and-stick model for Bi2Se3/GaAs interface with 0.75 ML of Se treatment and H3 stacking. The shaded area shows the interface region; scale bar, 1 nm. (d) Electronic band structure for Bi2Se3/GaAs with 0.75 ML of Se treatment. Four bands near the Fermi level are highlighted in red for comparison with the effective Hamiltonian.