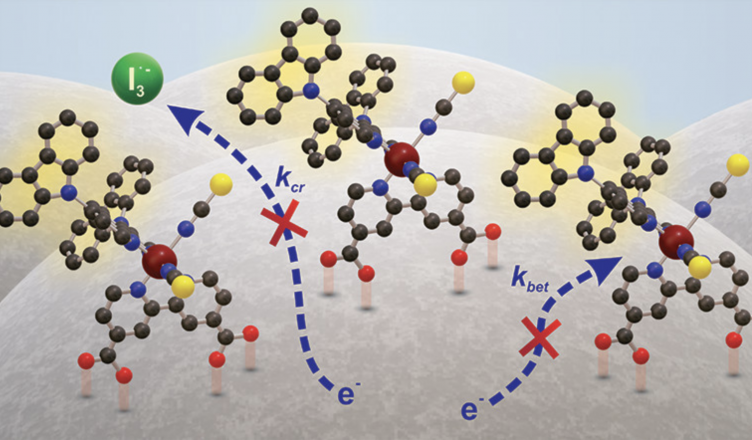 Supramolecular chemistry, also called “chemistry beyond the molecule”, focuses on the study of molecular recognition events that lead to the formation of self-assembled sets of a higher order, which are maintained by intermolecular or non-covalent interactions (Lehn, 1988; Lehn, 2007). Natural molecules, such as proteins, oligonucleotides, lipids and their multi-molecular complexes, were and still are the greatest source of inspiration for the development of supramolecular chemistry and nanotechnology (see the 2016 Nobel Prize) in the area of creation-related chemistry of molecular machines. 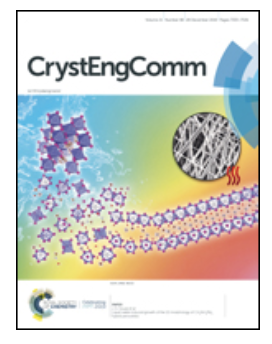 Light-harvesting organic–inorganic perovskites have attracted great attention due to their excellent photovoltaic performances. Methylammonium lead iodide (CH3NH3PbI3) has been the most studied material in this family and has been widely used as an absorber layer of perovskite-based solar cells (PSCs).

In this work, we present the decomposition-recrystallization process of CH 3 NH 3 PBI 3 from cuboid (3D) to (1E) needle-shaped morphology induced by hydraulic interactions observed in situ. 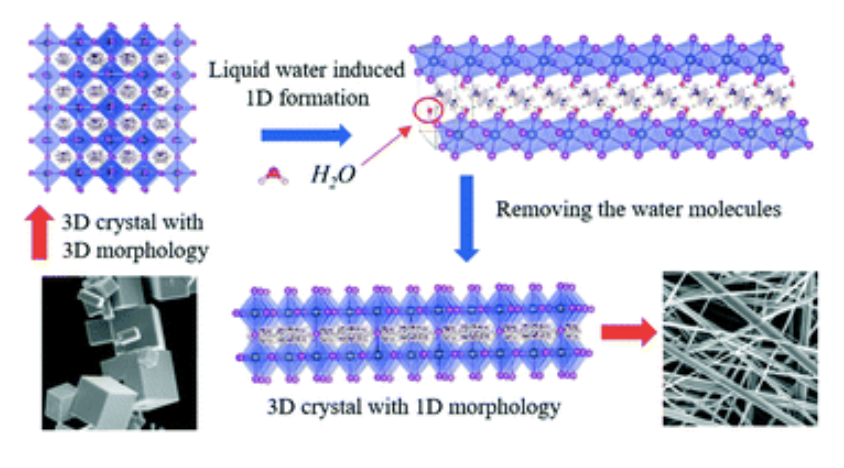 Even though the efficiency of PSCs is comparable to that of commercial solar cells, one of the major drawbacks is material stability [4, 5]. However, despite the great progress in efficiency over the past several years, CH3NH3PbI3 suffers from instability upon prolonged exposure to moisture, leading to rapid degradation. The presence of water has been widely regarded as harmful to the MAPbI3 perovskite as it is converted back to PbI2 and CH3NH3I irreversibly, resulting in a significant decline in the device performance [10–12]. Interestingly, recent studies have shown a counter effect, where the preparation of PSC under moderate relative humidity (RH) can improve the surface film quality and electronic behavior, demonstrating a positive role of water toward efficiency [13, 14]. 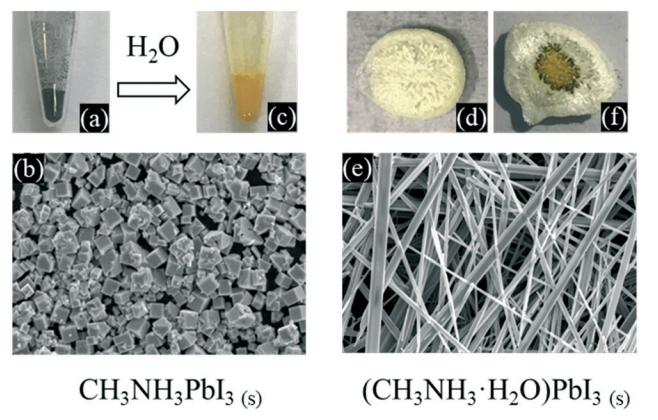 We showed that a monohydrate crystal phase was formed when CH3NH3PbI3 was exposed to liquid water after complete decomposition. This 1D monohydrate crystal phase was fully reversed to the 3D perovskite structure when the material was subsequently dried. Furthermore, we observed an in situ decomposition–recrystallization process in a controlled environment from cuboid to needle shape (please see the recorded movie in the ESI†). All these processes from dry to water condensation and to dry again lasted for less than 8 minutes and occurred at T = 1 °C. Our results suggested that the resulting yellow solution indicated the presence of [PbI6] 4− complex ions, CH3NH3 + ions, and water. The growth driving force involved a process where the 1D formation incorporated an assembly of [PbI6] 4− octahedra and (CH3NH3·H2O)+ ions, resulting in wire morphology.

Understanding and controlling the forward and backward electron transfer processes involved in the light-initiated energy conversion are the key points for the development of highly efficient dye-sensitized solar cells (DSSCs). After dye excitation, electron injection into the semiconductor oxide must be faster than excited state relaxation to the ground state. Additionally, collection of the injected electron at the back-contact and the regeneration of the oxidized dye must be fast enough to avoid energy losses due to electron transfer to the oxidized dye molecules or to the electrolyte [1]. One possibility to tune the rates of these electron transfer reactions is through the molecular engineering of the dye sensitizer. 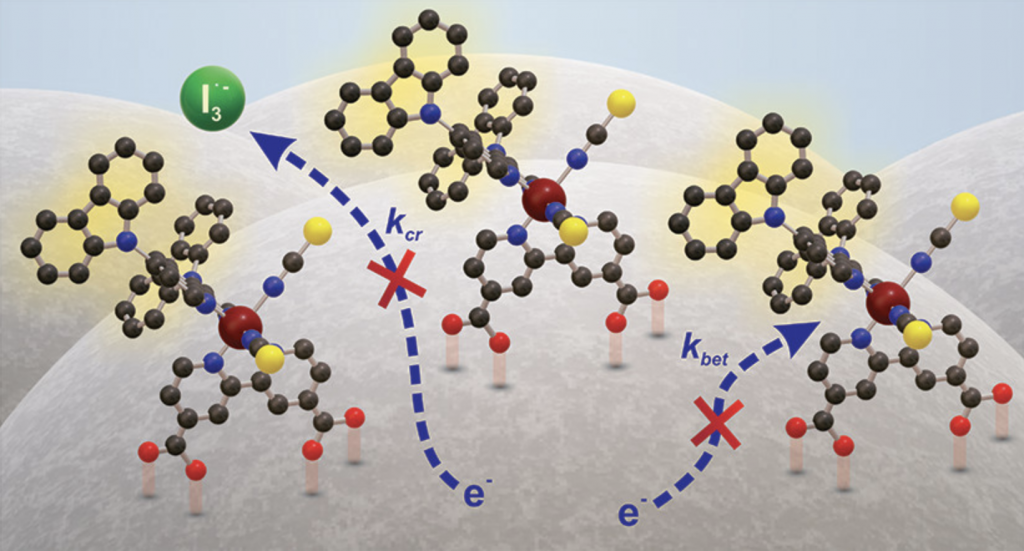 A series of cis-[Ru(LL)(dcbH2)(NCS)2] compounds, where dcbH2 = 2,2′-bipyridine-4,4′-dicarboxylic acid and LL = 1,10-phenanthroline (Ru(phen)), 4,7-dipyrrole-1,10-phenanthroline (Ru(pyr)), 4,7-diindole-1,10-phenanthroline (Ru(ind)), or 4,7-dicarbazole-1,10-phenanthroline (Ru(cbz)), was investigated for application as sensitizers in mesoporous TiO2 dye-sensitized solar cells (DSSCs). A systematic increase in the number of rings of the aromatic substituents at the 4,7-positions of the 1,10-phenanthroline allowed tuning of the molecular size of the sensitizers and the energy stored in the excited state while maintaining the same ground-state Ru3+/2+ reduction potentials. These small structural changes had a significant influence on the rates and/or efficiencies of electron injection, back-electron transfer, recombination to oxidized mediators, lateral self-exchange electron transfer, and regeneration through iodide oxidation that were reflected in distinct photoelectrochemical performance of full operating DSSCs. The global efficiencies, open-circuit voltages, and short-circuit current densities of the DSSCs consistently followed the trend Ru(pyr) < Ru(ind) < Ru(phen) < Ru(cbz), and the most optimal performance of Ru(cbz) was ascribed to dramatically slower recombination to the oxidized redox mediators. Transient photovoltage and transient absorption experiments both revealed significantly slower recombination as the size of the aromatic substituents increased with Ru(cbz) providing the most promising behavior for application in dye sensitization. 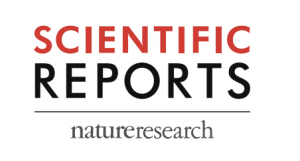 New techniques to manipulate the electronic properties of few layer 2D materials, unveiling new physical phenomena as well as possibilities for new device applications have brought renewed interest to these systems. Therefore, the quest for reproducible methods for the large scale synthesis, as well as the manipulation, characterization and deeper understanding of these structures is a very active field of research. We here report the production of nitrogen doped bilayer graphene in a fast single step (2.5 minutes), at reduced temperatures (760 °C) using microwave plasma-enhanced chemical vapor deposition (MW-PECVD). Raman spectroscopy confirmed that nitrogen-doped bilayer structures were produced by this method. XPS analysis showed that we achieved control of the concentration of nitrogen dopants incorporated into the final samples. We have performed state of the art parameter-free simulations to investigate the cause of an unexpected splitting of the XPS signal as the concentration of nitrogen defects increased. We show that this splitting is due to the formation of interlayer bonds mediated by nitrogen defects on the layers of the material. The occurrence of these bonds may result in very specific electronic and mechanical properties of the bilayer structures. 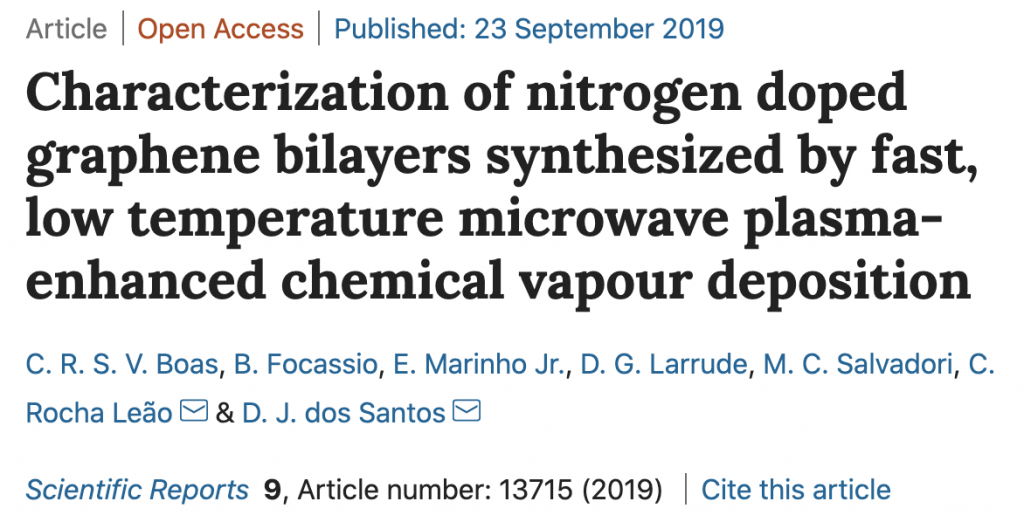 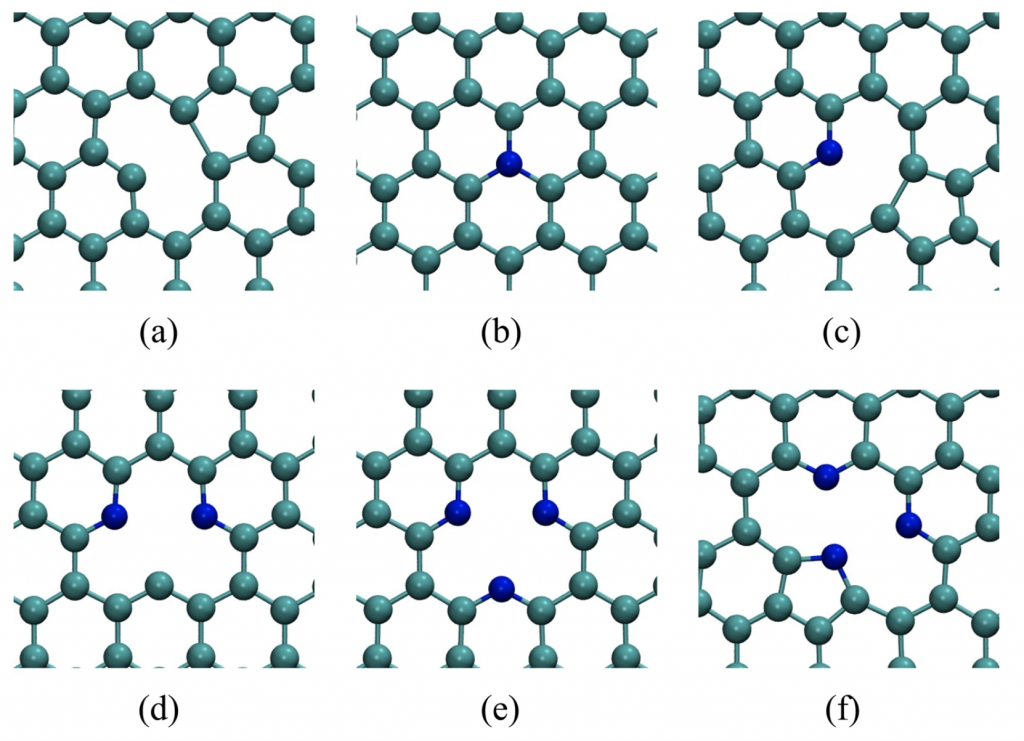 Hypertension or high-blood pressure is considered a multi- factorial disease being an important worldwide public-health challenge due to its high frequency and concomitant risks of cardiovascular as well as other diseases. It has been identified as the leading risk factor for mortality, being ranked as the third cause of disability-adjusted life-years. The worldwide prevalence of hypertension has been widely reported. During the past century, hypertension has changed from a minor cause of death and disability to one of the major contributors to the global burden of disease. 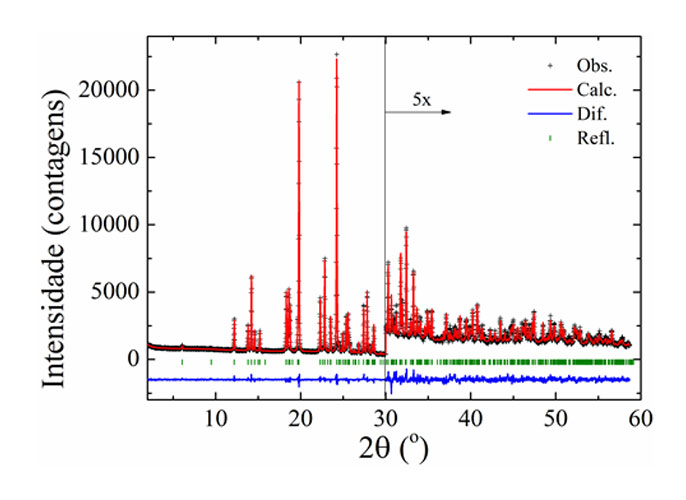 Plot from the final Rietveld refinement. Black crosses represent observed data, the red line indicates the calculated pattern and the blue line at the bottom represents the difference between the observed and calculated patterns. Green vertical bars indicate Bragg reflections. After 30° (2θ) the pattern was magnified (5×) for better visualization.

LASSBio-1289 compound has been found to promote intense vasodilation and antihypertensive activity. It is an innovative compound, without structural similarities to the three main classes of calcium antagonists (1,4-dihydropyridines, benzothiazepines and phenylalkylamines) commonly used. A complete knowledge of the structure, including stereochemistry, is essential to lead optimization in drug discovery. For this reason, in this work we determined the crystal structure of this novel vasoactive N-methyl-N-acylhydrazone derivative by means of X-ray powder diffraction data and an ab initio simulating annealing approach, allowing us to observe the relative configuration E of the imine double bond and its conformation as well as its most relevant intermolecular interactions. These findings were also checked by a FTIR analysis and confirmed in solution by NMR. The compound crystallized under a monoclinic crystal system with space group P21/c and unit cell parameters a = 14.5118(3) Å, b = 12.1374(2) Å, c = 7.5498(1) Å, β = 91.113(1)°, V = 1329.53(4) Å3, Z = 4, Z′ = 1 and ρcalc = 1.44042(4) g cm−3. Moreover, a crystal morphology prediction, experimentally compared with SEM inferred images, allowed a direct comparison of the microcrystalline habit and quality, allowing a study of the potential solvent effect on the crystal growth. See more in “Structural characterization of LASSBio-1289: a new vasoactive N-methyl-N-acylhydrazone derivative”. 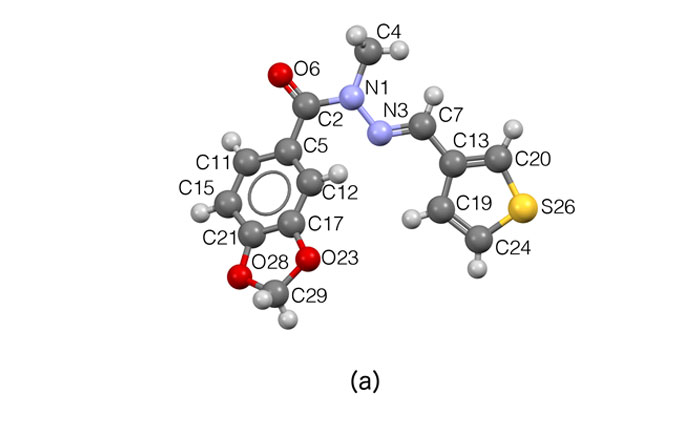 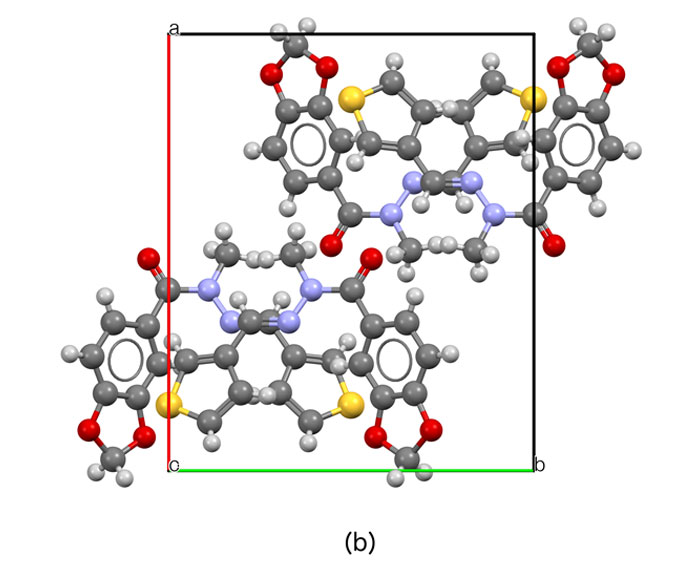