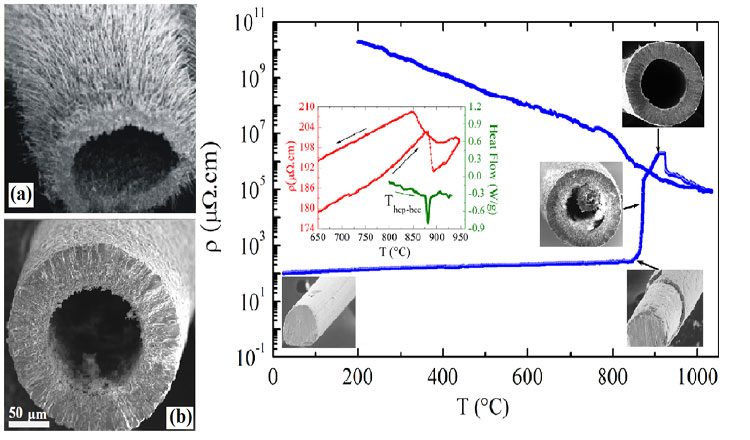 Hollow micro/nano structures form an important family of functional materials. We have used the thermal oxidation process combined with the passage of electric current during a structural phase transition to disclose a colossal mass diffusion transfer of Ti ions. This combination points to a new route for fabrication of hollow materials. A structural phase transition at high temperature prepares the stage by giving mobility to Ti ions and releasing vacancies to the system. The electric current then drives an inward delocalization of vacancies, condensing into voids, and finally turning into a big hollow. This strong physical phenomenon leading to a colossal mass transfer through ionic diffusion is suggested to be driven by a combination of phase transition and electrical current followed by chemical reaction. We show this phenomenon for Ti leading to TiO2 microtube formation, but we believe that it can be used to other metals undergoing structural phase transition at high temperatures.

Hollow structures with high surface-to-volume ratios and loading capacity have attracted great attention as an important group of functional materials. The diverse set of properties paves the way to the design of materials with multifunctional architectures, suited for a broad range of applications. Indeed, the fabrication of micro-nanostructures has been one of the aims that guide the basic research in condensed matter physics. As far as this point is concerned, there is a considerable interest in methodologies to fabricate and, consequently, use the physical and chemical properties of hollow micro-nanostructures. Controlled synthesis process would allow the formation of micro-nanostructures with multifunctional architecture in which several applications can be anticipated. One particularly important class of micro-nanostructure materials is that of transition metal oxides, which are good candidates for various applications in different fields such as nanofluidic, drug vectorization, catalysis, energy storage and conversion, spintronic devices, and biomedicine, or as metal-oxide electrodes in lithium-ion batteries and super-capacitors. 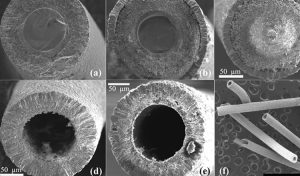 (Top panel) Scanning electron microscopy images obtained for three microwires subjected to a heat treatment up to T = 1050 °C for t = 0 (a), 1 h (b), and 2 h (c) without the passage of an electrical current. (Bottom panel) Transverse section images of microtubes obtained by thermal oxidation up to T = 1050 °C (t = 0 h) with an applied electrical current of 10 mA (d) and 0.1 mA (e). (f) Image of several segments of TiO2 microtubes. 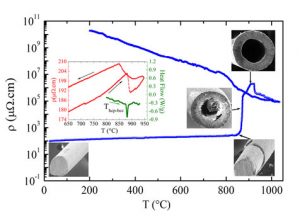 Temperature dependence of the electrical resistivity obtained during the thermal oxidation of a metallic Ti microwire in air with an electrical current of 10 mA. The inset shows electrical resistivity (red curve) along with a DSC (green curve) curve of a metallic Ti microwire in argon atmosphere revealing, at T = 891 °C, a structural phase transformation from a hexagonal close-packed to a body-centered cubic crystal structure. SEM images illustrate different stages of the process. 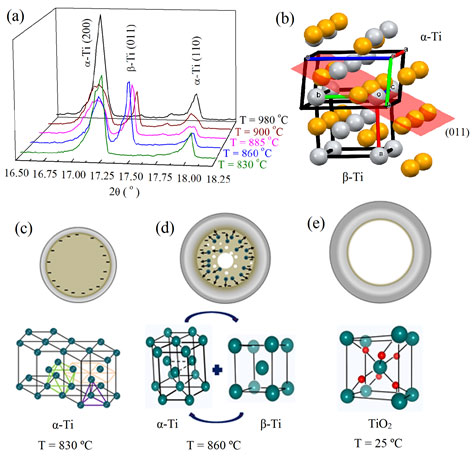 (a) In situ X-ray diffraction during the phase transformation showing the appearance and disappearance of a cubic β-Ti phase. (b) α- to β-Ti phase transformation displaying the movement of atoms along the (011) plane (orange atoms: α-Ti phase; grey atoms: β-Ti phase). The unit cells were rotated in order to provide a better visualization of the atoms. (c–e) Sketches of three main stages of the microtube formation process along with the crystal structure. At T = 830 °C, the electrical current travels on the surface of the wire – the lines represent the electric field in the metallic α-Ti phase. The structure shows two types of holes – octahedral holes with two staggered triangular planes of atoms and tetrahedral holes, which are formed by a planar triangle of atoms. (d) At T = 860 °C, the phase transition from α-Ti to β-Ti releasing a large number of Ti ions and vacancies. At room temperature, after the colossal mass transportation, a TiO2 microtube is observed.

We report a hierarchically ZnO micro/nanostructured material where ZnO microtubes are covered with ZnO nanowires. The synthesis process is partially driven by electrical current and accompanied in situ by electrical resistivity measurements. The thermal activated energy of the obtained semiconducting microtubes was estimated to be 0.5eV. Microtubes topped with nanowires may have multifunctional nature and tailored properties for technological applications. 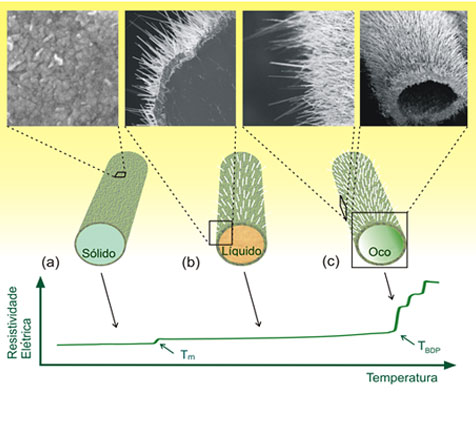 Sketch of the process. (a) Microwire just below the melting point of Zn (Tm 420 C). (b) Core/shell (Zn/ZnO) structure with ZnO nanowires covering the surface in the liquid phase range. (c) Formation of microtube after the evaporation of the Zn liquid in the inner part of the wire around TBDP=700 C.

We believe that promising breakthrough may be revealed when combining the different applications of microtubes and nanowires. For instance, taking advantage of the different scale and volume-to-surface ratio presented by microtubes and nanowires, one can associate sensor capabil- ities of nanowires with fluid properties of liquids in micro- tube, in one single device. As another example, one can use properties of the nanowires (field emission and sensor devi- ces, for example) while fluid is passing inside the microtube. Furthermore, it is known that ZnO is n-type semiconductor. Thus, one can fill the microtube with a p-type organic semi- conductor creating, for example, a diode-like device which may indicate different routes to microelectronic field. It can be filled with any other materials with exotic properties as well building devices with multifunctional applications. We hope that the discussion presented here will attract attention from the scientific community and other insights may come out along this line.

This work presents a processing synthesis method to obtain hierarchically structured materials. A fast, simple, and reproducible synthesis method to produce micro- tubes topped with nanowires is described. Our study contrib- utes to both fundamental material science and material design with potential smart multifunctionalities. It put forward possibilities of integration of the two hierarchical morphologies into one device that could rationally combine the advantages of different applications of microtubes and nanowires. The processing technique, going beyond the melting point of Zn and the breakdown of the metallic perco- lation threshold, was accompanied in situ by electrical resistivity measurements. One can tune in the morphology of ZnO nanowires on ZnO layer by choosing the set point temperature, temperature rate, and probably electric current magnitude. We believe that the present fabrication approach may be applied to grow hierarchical structures of other met- als with low melting point. Hierarchical morphologies such as presented in this work may have multifunctional proper- ties in technological applications. 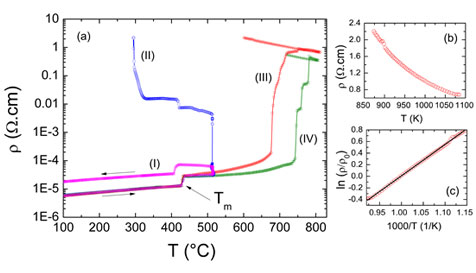 The temperature dependence of electrical resistivity for Zn metal wire measured up to 515 C with two different waiting times—30 (curve I) and 60 (curve II) minutes. Other two runs measured up to 810 C in O2 flow (curve III) and in air (curve IV). Tm is the Zn melting point. (b) The electrical resistivity measurement in the high temperature range (curve III) and (c) its linear behavior when plotted as lnq/ q0 versus 1/T revealing thermally activated behavior.

Representative images of SEM showing the formation of nanowires on the top of microtubes. (a) The biggest obtained microtube decorated with nanowires with 120 lm in diameter. (b) and (c) Other long microtube with 50 microm in diameter.

See the article in  Microtubes decorated with nanowires

We report both coaxial core-shell structured microwires and ZnO microtubes with growth of nanosticks in the inner and nanowires on the outer surface as a novel hierarchical micro/ nanoarchitecture. First, a core-shell structure is obtained—the core is formed by metallic Zn and the semiconducting shell is comprised by a thin oxide layer covered with a high density of nanowires. Such Zn/ZnO core-shell array showed magnetoresistance e ect. It is suggested that magnetic moments in the nanostructured shell superimposes to the external magnetic eld enhancing the MR e ect. Second, microtubes decorated with nanowires on the external surface are obtained. In an intermediate stage, a hierarchical morphology comprised of discrete nanosticks in the inner surface of the microtube has been found. Hyper ne interaction measurements disclosed the presence of con ned metallic Zn regions at the interface between linked ZnO grains forming a chain and a ZnO thicker layer. Surprisingly, the metallic clusters form highly textured thin at regions oriented parallel to the surface of the microtube as revealed by the electrical eld gradient direction. The driving force to grow the internal nanosticks has been ascribed to stress-induced migration of Zn ions due to compressive stress caused by the presence of these con ned regions. 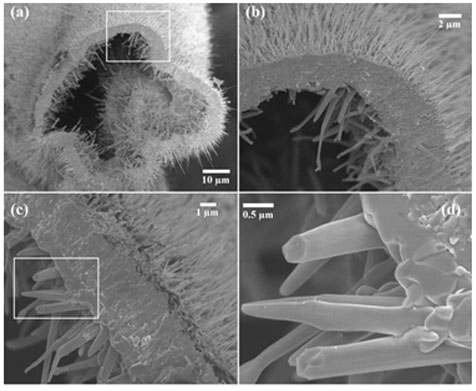 ZnO microtubes with growth of nanosticks inside and nanowires on the outer sur- face as hierarchical micro/nanoarchitecture have been reported. First, a coaxial core/shell microwires is obtained—the core is formed by metallic Zn and the semiconducting shell is comprised by a thin oxide layer covered with a high density of nanowires. We have found an enhancement of MR e ect in the samples with ZnO nanostructured shell on the surface of the microwires. We believe that induced ferromagnetic-like moments in the nanostructured shell and nanowires superimposes to the exter- nal magnetic eld. is e ect brings about a larger e ective magnetic eld in the core, which in turn enhances the MR e ect in the hierarchically nanostructured samples. Second, microtubes, formed due to complete evaporation of the core, decorated with nanowires on the external surface are obtained. In an intermediate synthesis stage, between coaxial core/shell structure and microtubes formation, a hier- archical morphology comprised of nanosticks in the internal surface of the tube has been discovered. e synthesis process of this hierarchical micro-nanostructured material, going beyond the melting point of Zn and the evaporation of the metal, was accompanied by in situ electrical resistivity measurements. PAC spectroscopy measurements revealed the presence of highly textured metallic Zn in the interfacial layer between Zn polycrystalline metal (core) and the thin layer of ZnO. Hyper ne interactions measure- ments showed the presence of con ned metallic Zn regions, even a er long oxidation times. e x-ray di raction indicates growth in the c-direction, (002) plane. Unpredictably, the metallic Zn clusters form highly textured thin at regions oriented parallel to the surface of the microtube. e driving force to boost the growth of internal nanosticks has been attributed to stress-induced migration of Zn ions due to compressive stress caused by the presence of con ned regions at the interface between ZnO layer and chain of ZnO grains. 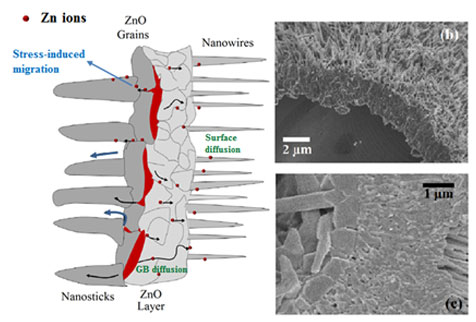 (a) ( is gure was drawn by the rst author Cynthia M. Rivaldo-Gómez) Sketch of di erent regions observed in the ZnO microtubes illustrating the growth mechanism of the internal and external nanostructures of the microtubes. e metallic regions in red between layers are detected by PAC. (b) SEM image of a microtube in an intermediate stage showing a thin layer of Zn metal covering the inner surface. (c) Transversal section of ZnO microtube showing the presence of a chain of ZnO grains and a continuous ZnO layer.