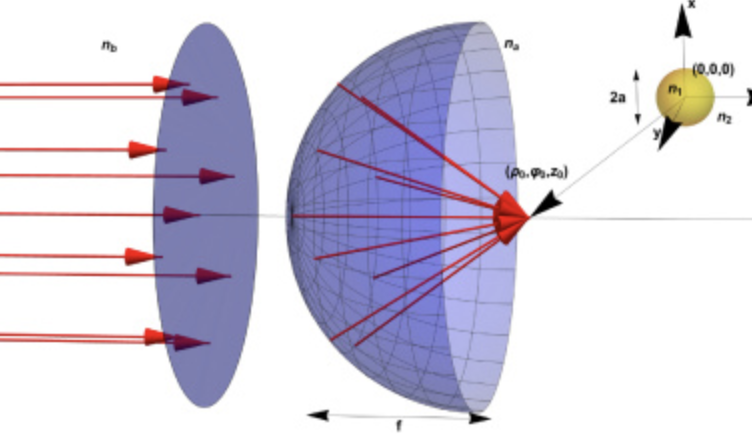 Optical tweezers were one of the last techniques to receive the Nobel Prize in Physics in 2018. Half of the award went to inventor Arthur Ashkin, just 93 years old. The optical tweezers technique is a nanoscale force spectroscopy tool, much like the atomic force microscope, but with a number of advantages. Compared to the atomic force microscope, the optical tweezers have the softest trap elastic constant, this allows to investigate soft materials, it is also possible to have more than one trap in close proximity and even to make measurements inside cells.

To operate the optical tweezers as a force microscope, a microsphere is generally used as a force transducer, whose values are calibrated using specific protocols. From the theoretical point of view, it is possible to know this force exactly. In general, approximations are used for when the sphere is much smaller or larger than the wavelength of the trapping laser light. But most of the time, the sphere is of the same order as the laser wavelength, and in this case rigorous treatment using electromagnetism is the only way. This procedure is treated as too complex or quite laborious by many, so we have recently been invited to publish a didactic tutorial on how to perform these step-by-step calculations in the Journal of the Optical Society of America B.

If you are interested in learning more about Optical Tweezers and the 2018 Nobel Prize in Physics, there is a recent video posted on Youtube (in Portuguese) during the event Física ao Entardecer at IFT-Unesp.

A photonic nanojet (PNJ) is a narrow (subwavelength) and elongated region with high intensity located at the shadow-side surface of an illuminated loss-less dielectric microcylinder or microsphere  and . In the present study, we focus on PNJs generated by a dielectric microsphere acting as a focusing lens, which results in the build up of spherically aberrated rays in the focal region. This build up of rays in the spatially localized high-energy-density region constitute the external caustic  and . Therefore, PNJs are not a new phenomenon, but they have attracted renewed interest because of recent technological advances allowing the exploitation of this high-energy-density region. Nonetheless, contrary to a possible understanding via geometrical optics or catastrophe theory, we aim to obtain an exact solution of Maxwell׳s equations by employing the generalized Lorenz–Mie theory (GLMT), as in the study by Devilez et al. Such focusing of light using a microsphere has also been investigated by Kofler et al.  using the uniform caustic asymptotic method, to obtain analytical expressions for the intensity by matching the geometrical-optic solutions with Bessoid integrals. However, for optical trapping applications, the scattering object is a microsphere of size comparable to the illuminating wavelength and consequently outside the regime of geometrical optics.

Photonic nanojets have been brought into attention ten years ago for potential application in ultramicroscopy, because of its sub-wavelength resolution that can enhance detection and interaction with matter. For these novel applications under development, the optical trapping of a sphere acts as an ideal framework to employ photonic nanojets. In the present study, we generated nanojets by using a highly focused incident beam, in contrast to traditional plane waves. The method inherits the advantage of optical trapping, especially for intracellular applications, with the microsphere in equilibrium on the beam propagation axis and positioned arbitrarily in space. Moreover, owing to optical scattering forces, when the sphere is in equilibrium, its center shifts with respect to the focal point of the incident beam. However, when the system is in stable equilibrium with a configuration involving optical tweezers, photonic nanojets cannot be formed. To overcome this issue, we employed double optical tweezers in an unorthodox configuration involving two collinear and co-propagating beams, the precise positioning of which would turn on/off the photonic nanojets, thereby improving the applicability of photonic nanojets. 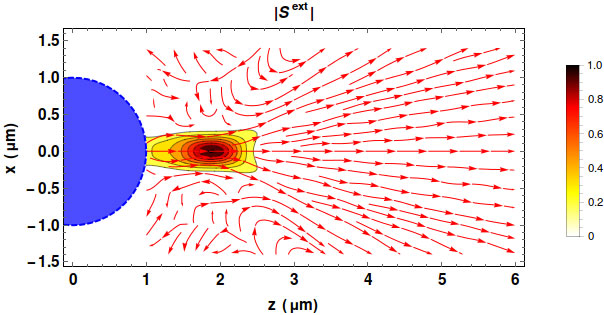 Contour and vector plot of the intensity and time-averaged Poynting vector, respectively for the interference between the incident and scattered fields.