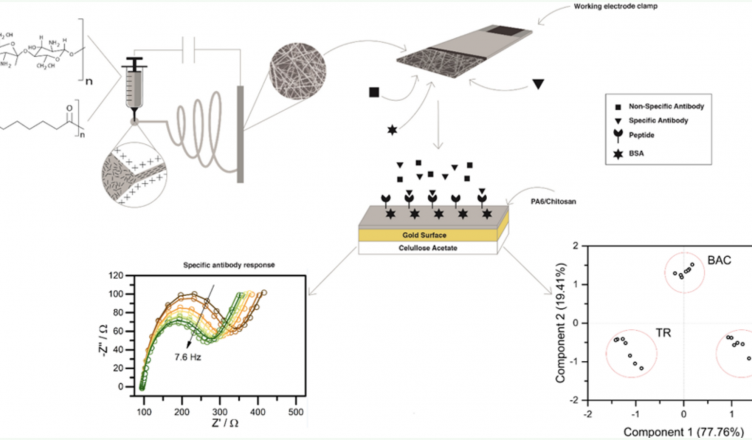 The blend was chosen due to the excellent properties of chitosan (biocompatibility) and polyamide (mechanical properties), being used in the immobilization of biomolecules, which are incorporated by electrostatic entrapment, preserving their structure and therefore their bioactivity even when compared to materials that are already used for such function. The work was promising, where it was possible to detect concentrations of the order of 1 pg mL-1 (while the ELISA reached 1 ng mL-1), discriminating clearly and objectively human serum samples contaminated with visceral leishmaniasis and healthy humans. 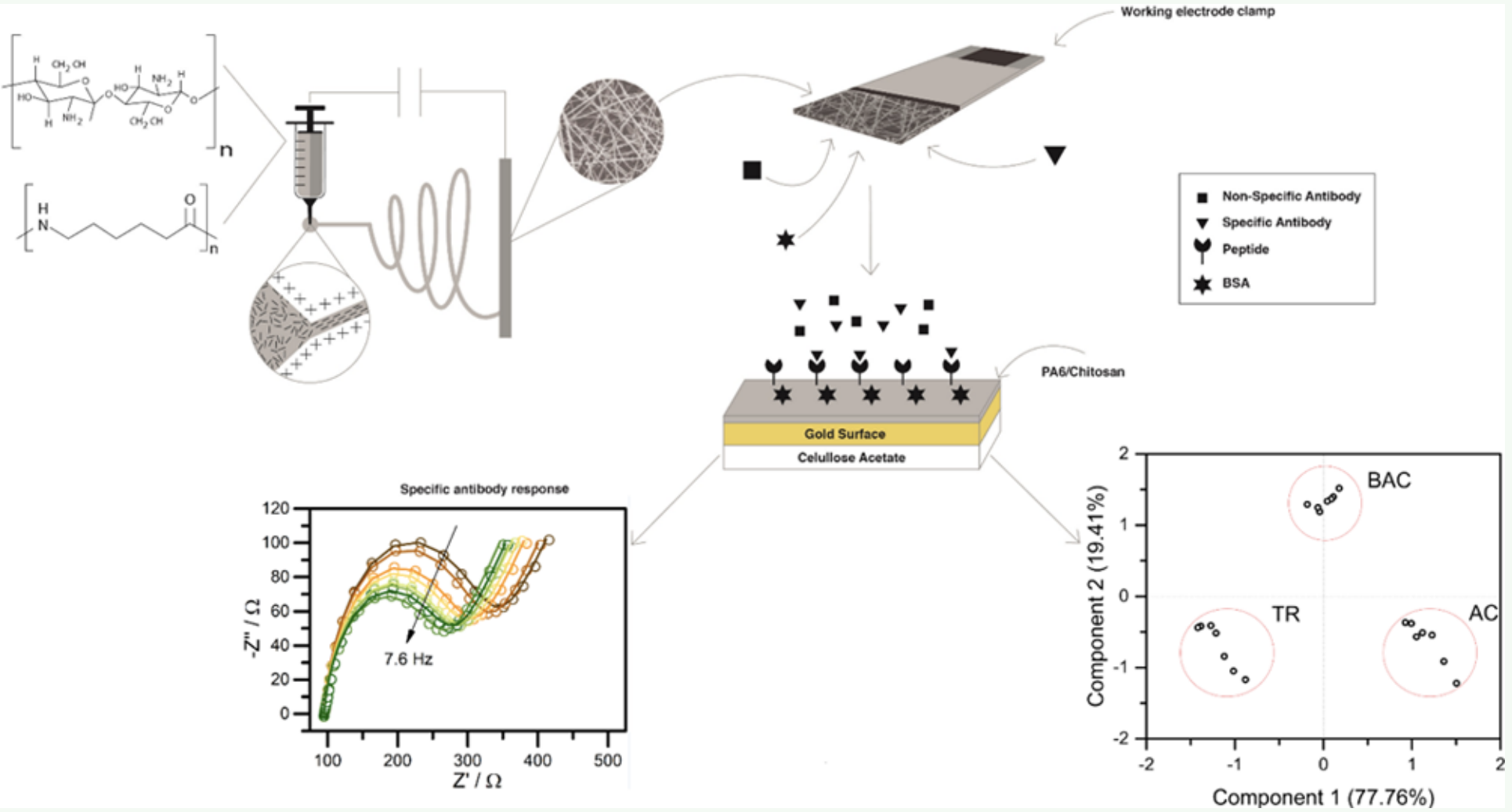 There is a growing interest in exploiting the ability to synthesize gold nanoparticles (GNPs) of controlled size and shape mediated by amino acids and peptides. For many years, numerous synthetic strategies developed for the synthesis of GNPs have frequently required the use of harsh reagents for controlling the particle morphology. The search for eco-friendly conditions showed that peptides are an interesting alternative for reducing the environmental impacts during the synthesis of GNPs. Also, the capping of GNPs provided by peptides assures efficient delivery and biocompatibility that can contribute to the use of theranostic properties of these materials.8 Moreover, the functional groups available in the peptides, such as −SH and −NH2, allow a fine control of the synthesis for achieving the desired functionality for the material. Peptides provide templates that direct the growth and shape of the metal nanoparticles as well as their capping. Particularly, the presence of a cysteine residue in a peptide provides a mild reducing agent for biomineralization and an efficient anchor for the peptide on the GNP surface. Therefore, a peptide containing a cysteine residue is a promising compound for the controlled synthesis and capping of GNPs. The manipulation of the reaction conditions and a rational choice of the amino acids arrangement (bioinspired sequences) make feasible the specific directing of the GNP spatial growth assisted by peptides. Bioinspired peptides have been shown to be useful for the assembly and synthesis of gold nanostructures. 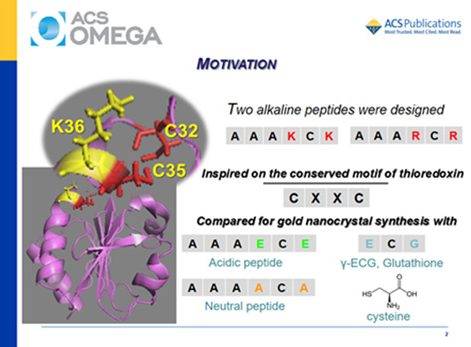 Alkaline peptides AAAXCX (X = lysine or arginine residues) were designed based on the conserved motif of the enzyme thioredoxin and used for the synthesis of gold nanoparticles (GNPs) in the pH range of 2–11. These peptides were compared with free cysteine, the counterpart acidic peptides AAAECE and γ-ECG (glutathione), and the neutral peptide AAAACA. The objective was to investigate the effect of the amino acids neighboring a cysteine residue on the pH-dependent synthesis of gold nanocrystals. Kohn–Sham density functional theory (KS-DFT) calculations indicated an increase in the reducing capacity of AAAKCK favored by the successive deprotonation of their ionizable groups at increasing pH values. Experimentally, it was observed that gold speciation and the peptide structure also have a strong influence on the synthesis and stabilization of GNPs. AAAKCK produced GNPs at room temperature, in the whole investigated pH range. By contrast, alkaline pH was the best condition for the synthesis of GNP assisted by the AAARCR peptide. The acidic peptides produced GNPs only in the presence of polyethylene glycol, and the synthesis using AAAECE and γ-ECG also required heating. The ionization state of AAAKCK had a strong influence on the preferential growth of the GNPs. Therefore, pH had a remarkable effect on the synthesis, kinetics, size, shape, and polydispersity of GNPs produced using AAAKCK. The AAAKCK peptide produced anisotropic decahedral and platelike nanocrystals at acidic pH values and spherical GNPs at alkaline pH values. Both alkaline peptides were also efficient capping agents for GNPs, but they produced a significant difference in the zeta potential, probably because of different orientations on the gold surface. 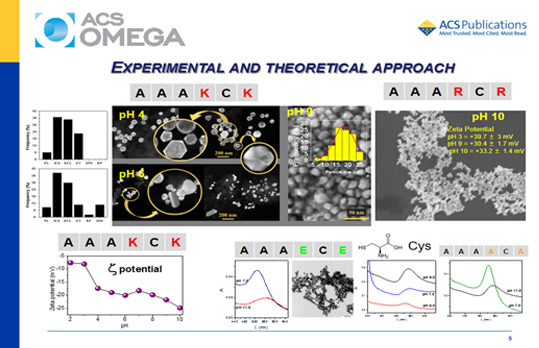 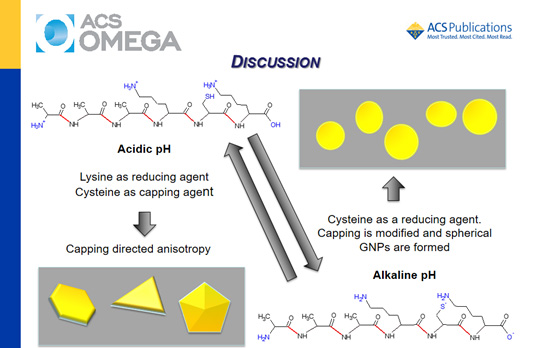 In an other study, poly(lactic acid) (PLA) and their blends with 5%/wt and 10%/wt thermoplastic starch (TPS) were submitted to degradation in simulated soil. To investigate the mechanisms involved in the degradation, we also submitted the samples to degradation by tert-butyl hydroperoxide, myoglobin, and peroxide-activated myoglobin. The samples were analyzed by Fourier-transformed infrared spectrometry (FTIR), scanning electronic microscopy (SEM), contact angle analysis, and mass loss measurement. The FTIR results indicated a weak interaction between the two components (PLA and starch) in the blend’s amorphous structure. However, the corresponding SEM images showed that TPA increased ridges and roughness at the material surface associated with an increase of wettability evidenced by contact angle analysis. Consistently, TPS favored degradation of the material both in the simulated soil and pro-oxidant model systems. In the simulated soil, the occurrence of TPS hydrolysis provided glucose, a biological fuel, that contributed to the growth of the microorganisms. The similar degradation patterns observed in mimetic pro-oxidant biological systems and soil suggest that oxidative reactions catalyzed by heme proteins from biological sources as well as the presence of peroxides and transition metal traces in the original materials have a significant contribution to PLA and PLA/TPS degradation. See the article in  Biological Oxidative Mechanisms for Degradation of Poly(lactic acid) Blended with Thermoplastic Starch  publicado em ACS Sustainable Chem. Eng.  2015. 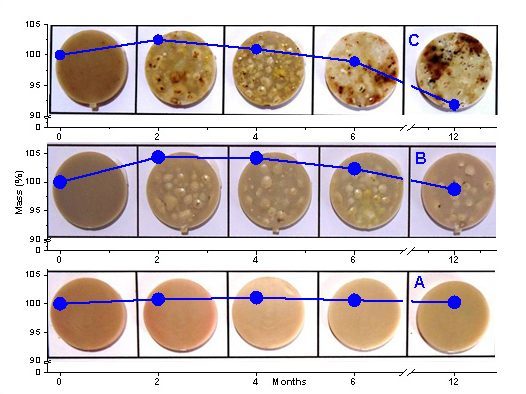 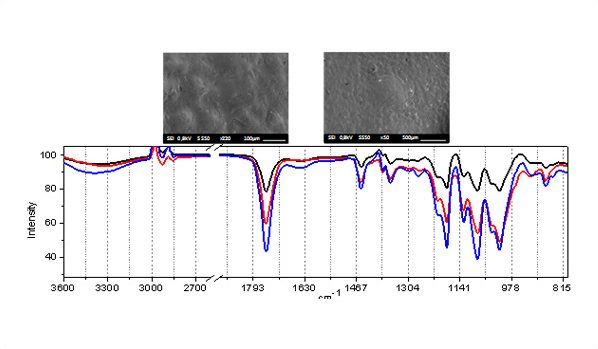 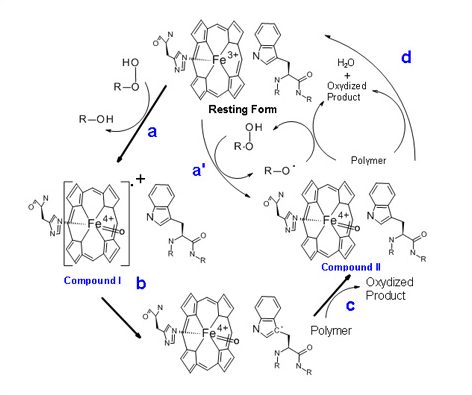